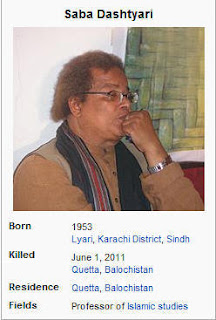 Baloch Republican Party pays highest tributes to Kandeel-e-Baloch (Teacher of the Baloch nation) Shaheed Professor Saba Dashtyari on his first martyrdom anniversary. We salute his struggle for enlightenment of Baloch nation about national independence and freedom. His sacrifice for the noble cause of freedom spirited up the Baloch national struggle. He was martyred by the intelligence agencies of the occupying state Pakistan on June 1, 2011.

Pakistan army, frontier corps, intelligence agencies have been extra-judicially abducting, detaining, torturing and killing Baloch cream such as teachers, lawyers, intellectuals, writers, students and others to prevent Baloch to get cognizant of what the occupying state has been doing to them for decades. Baloch Republican Party pays tributes to him and directs its members to hold condolence references and Quran Khuwanis on June 1 in tribute to teacher of the Baloch nation Shaheed Professor Saba Dashtyari.

Baloch Republican Party warmly welcomes the US Senator Rand Paul’s proposal to suspend all US aid to the occupying state of Pakistan and terms it as confirmation of the stance of Baloch people. We have always been warning the International Community and particularly the United States about Pakistan double crossing them. Pakistan sentenced Shakil Afridi of long imprisonment for assisting the United States in search of Alqaeda terrorist chief Osama Bin Laden that exposes the real face of Pakistan who have been assisting and training terrorists in spite of receiving billions of dollars in aid from US. Rather, all that weaponry, finance and other aids are being used by Pakistan in genocide of Baloch nation and sustain its illegal grip over Balochistan.

Baloch nation appeals to the United States, NATO countries and other countries aiding Pakistan to immediately stop all kinds of financial and other aids to Pakistan to end the Baloch genocide and gross human rights violations being committed by Pakistan in Balochistan.