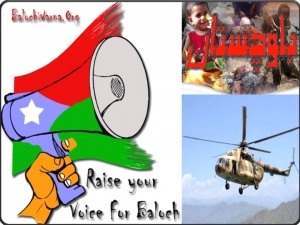 Occupied Balochistan: A spokesperson of the Baloch National Voice (BNV) has said that Pakistani Gunship Helicopters and fighter jets have started bombing civilian population, under the directions of IG FC, in Kohistan Marri region, here on Sunday.

According to a statement of the Baloch National Voice, the Pakistani fighter jets and gunship helicopters carried out bombardments in Bhambor, Trataani, Taddari and surrounding area of Kohistan Marri region, in Balochistan. The BNV said that the fresh bombardment and operation started after the IG FC (Inspector General of Frontier Corps) had asked the federal government of allow the use of air-strikes in Balochistan. “The IG FC’s request has been entertained and being implemented”, said the BNV statement.

The statement of the BNV further read that due the whole-day bombardment over a dozen people including women and children have been killed and injured – also several livestock have been killed due indiscriminate shelling from Pakistani security forces’ check posts and aerial bombing. “The enemy forces want to eliminate the Baloch nation that is why they’re using latest lethal weapons including cluster bombs, napalm and other chemical weapons to contaminate the air with poisonous gas making it extremely difficult for the local population to breath in fresh air”, said BNV in their statement.

The Pakistani security forces have laid anti-personnel mines on all the roads that link Kohistan Marri to other cities of Balochistan, hence people are unable to take the wounded to doctors – they are left stranded in appalling conditions, read the BNV statement adding that the local people says crops are ready for harvest but the Pakistani security forces issued warnings that people will be shot dead if they do the harvesting. According to the BNV such preventive actions taken by Pakistani security forces do not only cause loss millions of rupees but it is also aimed to economically bankrupt the Baloch people. The BNV has requested the International media and analysts to visit Balochistan, especially the affected areas, including Kohistan Marri to witness and observe the Pakistani atrocities.

“As a Baloch representative Organisation we had invited the United Nations High Commissioner for Human Rights to Balochistan so that she could observe the ground realities herself. Although expressing concern over Balochistan issue appreciable but International Organisation instead of fulfilling their responsibilities are impractical with regards to Balochistan issue, which encourages the enemies of the Baloch people to continue its genocide strategies in Balochistan without any fear and hesitation”, read the BNV statement.

The BNV appealed the UN and all other democratic and civilised nations of the world to take notice of Balochistan issue and support the Baloch National Freedom movement which in accordance with International principles. The international community should immediately take action against the Baloch enemy state [Pakistan], which is responsible for endangering world peace.