The abduction of unarmed Baloch men, women and children continues unabated in Balohistan 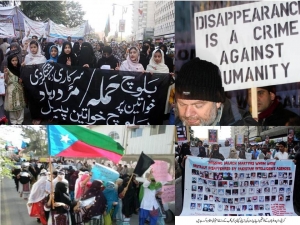 Occupied Balochistan: The abduction of unarmed Baloch men, women and children at the hand of occupying Pakistani forces continues with immunity. The National and International claimants of champions of Human Rights and democracy are turning a blind eye to the Baloch plea for help.

Baloch Republican Party central spokesperson tweeted earlier this morning that last night four men with their wives and three children have been abducted by Pakistani armed forces in Singsela area of Dera Bugti and Quetta, Balochistan. FC Personnel, according to Mir Sher Mohamad Bugti, are forcing miserable Baloch People to Migrate from Sangsela. Balaach Marri, a social media activist in twitter said that FC while patrolling village of Sengsela, repeatedly announced on loud speakers: "IF YOU WANT YOUR PEOPLE BACK ALIVE, GET OUT OF SENGSELA!"

The abducted people have been named as Merzar, Wazeer Khan, Mandi and Dito along with their children and wives who’s Name are Shali, Losha, khaira Bibi. Sources reported that Wazeer khan’s family were abducted from a hospital in Quetta.

Meanwhile in Sibi town of Balochistan the family members of abducted Baloch women have expressed their utter desperations saying that world community had left them on the mercy of Pakistani murderous armed forces, the member of the missing Baloch women and children lambasted the world community for their apathy toward Baloch plight at the hand of Pakistan.

They said that world community yesterday celebrated International women day. However their International Champions of women’s right failed to utter a single word against the abductions of Baloch women and children by brutal Pakistani and Iranian security forces. The family member said that the existence of such NGOs is a big question mark. So for more them 15o women have been abducted by Pakistani armed forces in Baochistan. They are languishing in Pakistani armed forces torture cells facing worst type of inhuman tortures and immoral treatments.