The 17 March of Baloch Nation 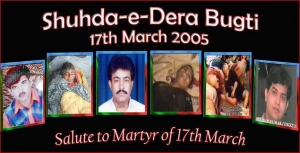 The 17 March in Baloch History is a day when the sun rises but dipped in red ink, it seems as the sun has soaked the blood of those 73 innocent Baloch victims who were laid to rest by the state with its sophisticated war heads aided by US military against Al-Qaeda.

The death toll reached 73 which comprised mainly of women & children, imagine if this happened in Kashmir or Palestine then there would have been a cry out inside Pakistan mostly the Ulema’s Council would have targeted India & Israel over the mistreatment of Kashmiris & Palestines, although we know that to enslave and kill one human is against Humanity itself & Baloch are part of that family which is Humanity but in Balochistan it is said but not done, If you ask for separation from Pakistan then you get the fist doesn’t matter what gender or age you prefer to, Baloch inwhole are enemy of the state.

Once ex-president of Pakistan Parvez Musharraf said that “we do endorse the idea of humanity but we won’t endorse the idea of Baloch separatist & would like to see them crushed rather than surrender” One can see what this sentence perceives and it surely doesn’t stands for Humanity serving, indeed it solves the puzzle what is the mindset of most Pakistani politicians & army personals regarding the Baloch insurgency.

One such incident happened on 22 March 2005 when a delegation of Pakistani Armed Forces led by General Shujaat Dar & Brigadier Salim and they stated “The March 17 incident was not the result of any planning but an accident occurred due to anxiety on both sides”, if this wasn’t planned than what would be the meaning of “Carpet Bombing” were they “Pakistani Army” spray painting the land of Dera Bugti or they were killing the Baloch victims as pest under the US Supplied war heads.

At this day Nawab Bugti said a famous “I Have No Solutions to offer the Government, they killed 73 of my people. They may kill 200 or 400. They may even kill me but they cannot kill the entire Baloch nation”. This was no accident it was a fully fledged cleansing the land of Dera Bugti of the supporters of Nawab Akbar Khan Bugti.

The more strategic is this case the more it is violent, But there is a silent on the media over this case of mass murder because it is reported widely that those who were killed in a “Carpet Bombing” style cobra operation were actually insurgents, no reports filed no investigation needed this is 17 March 2005 where the target was Nawab Akbar Khan Bugti but instead it started a resistance that is still being carried on and had gained international light with more friends than foe.